The second edition of the Denmark Across route is getting ready for your adventure this summer, and we have grown a bit this year.
1350km of awesome country views.


Ill drop a post later with a lot more about the new route, but for now, here are some primary things about it.

Some sections have been swapped, and a lot of tarmac has been removed and replaced by gravel and track. Other sections where we barely could walk last year have been moved to more doable tracks.

We are still going to have mud, water, sand, and gravel, but I hope it’s in a nice mix. 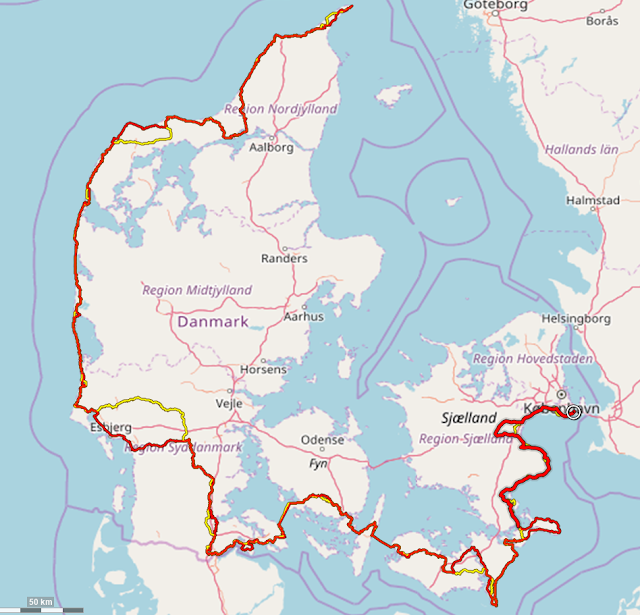 Some rules is gonna be changed too.

1. One is that the two first days of stage rules are reduced to only being the first day.

So we are only going to have a neutral camp on a specific spot, pointed out by me later. Same rule as last year. The clock stops when you arrive, and starts the next day at 0600. It’s permitted to skip the camp, but you will NOT be given any time reduction. We will have a nice party at the Smile Camp, so you won’t want to miss out.

2. The permitted beach option will be reduced by some kilometers...

The rule does not go for the whole stretch of the west coast. The Beach option is only permitted from Lidl strand to Skagen/finish. There is simply too much nice riding inland that I don’t want people to miss.
So, the same as last year, but for 2018, you cannot ride the beach until Lidl Strand, from there you can swap between the track and the beach. Always going in a straight line between the two when swapping.


3. You remember the "It’s a Cost-Free Race" remark from last year? That one is gone.. and then again no.
For the 2018 riders there will be a 750,- dkr fee to pay (100,-€/120$), but for the true riders this amount will be given back, on the 4. day.
And why this ?
Due to the rider limit, there will only be room for riders that actually are on the start line.
So if you want to go, you got to show me some commitment with this payment.
No shows, will have lost the money, and I’ll be swimming in all the Beers I’m spending the money on.
If we have no-shows before the start, we might even have a small feast in the Camp on the first day.

(Nominating yourself on the Facebook event means nothing.. that thing is only made to advertise for the start day)

Still wanna go ? Here is how to get a spot (and there are not alot of them)

The list is open from now on until the 30. Juli

Note. The rest of the site is updated.
Indsendt af Casper Ortvald kl. 06.14